The first study we will examine is a feasibility study of ultrasound-guided peripheral nerve block catheters for pain control on pediatric medical missions. It was carried out in several developing countries in 2007. These countries included the Philippines and Ecuador. In the Philippines, two girls, ages eight (8) and ten (10), were subjects of the study, and for Ecuador, the participants were patients of pediatric orthopedic surgeries. At the end of the research, it was concluded that ultrasound-guided continuous peripheral nerve blocks are predominantly useful as the sole analgesic technique on pediatric medical missions in underserved countries.

The next research on our list takes us to Switzerland. Between June 8 and July 6, 2018, a survey was carried out in Switzerland to determine the preferred approach for peripheral nerve blocks within the country. A total of four-hundred- twenty-two (422) anesthesiologists took part in the survey. The lesser majority of the participants indicated that their preferred approach to nerve blocks is ultrasound-guided, the larger portion of participants decided on the dual guidance approach.
Ultrasound-guided peripheral nerve block has seen so much growth in its usage worldwide in even the treatment of leprosy patients living in developing countries. The third study we looked at was in relation to ultrasound-guided peripheral nerve blocks in the treatment of leprosy. This disease is still very prevalent in some countries within Africa, Asia, and Latin America. It is seen primarily in underprivileged areas where medical care is nearly non-existent. The study conducted in these regions showed that ultrasound guidance retains its value by making it possible to specify the actual current threshold. However, ultrasound use is limited by its cost and availability in leprosy endemic areas.”

Finally, we analyzed results of a research which showed that in several studies, it was identified that regional anesthesia via ultrasound-guided peripheral nerve block is used in a minority of orthopedic patients in the United States. However, its utilization is higher in European countries. A more international perspective is offered by the Global Orthopaedic Registry (GLORY). A study into the epidemiology, trends, and disparities in regional anesthesia for orthopedic surgery was carried out by the organization. It enrolled 15,020 patients from one hundred (100) hospitals in thirteen (13) countries. The countries included in the study were Australia, Brazil, Bulgaria, Canada, Columbia, Germany, Italy, Japan, Poland, Spain, Turkey, the United Kingdom, and the United States of America. The overall conclusion arrived at the end of the study was that it seems as though the international use of general anesthesia may be lower worldwide. However, the use of regional anesthesia, including ultrasound-guided peripheral nerve blocks, is higher worldwide when compared to data from the United States. 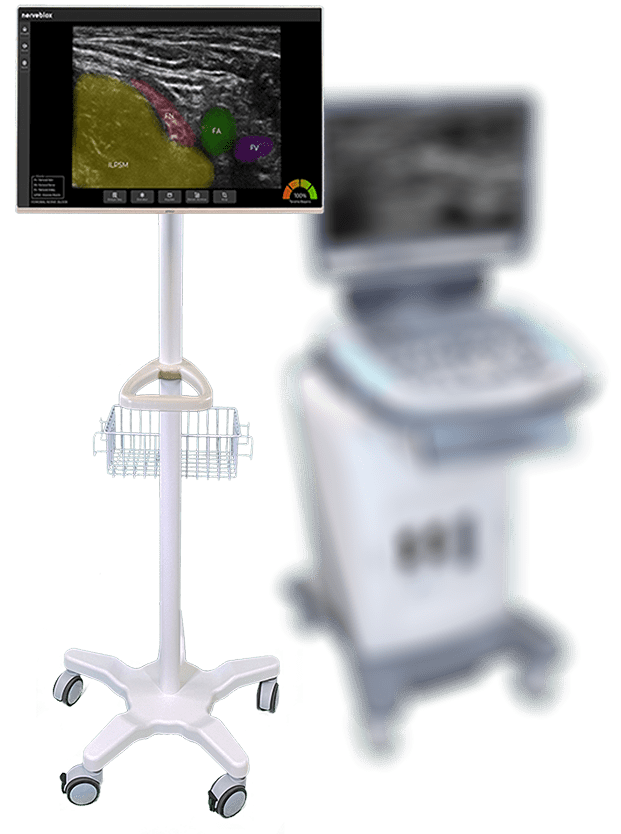 It’s perfect time to use AI in healthcare.

AI systems are able to learn incomparably faster than human beings. This allows us to develop artificial experts tutored in numerous institutes in a short time.

Our systems are used by healthcare professionals as a training tool to acquire and enhance their ultrasound interpretation skills.
NOT AVAILABLE FOR CLINICAL USE. NOT AVAILABLE FOR COMMERCIAL SALE AS A MEDICAL DEVICE.